We were treated to warm autumnal sunshine for the drive over to the dark side for the Good Shepherd race from Mytholmroyd in Calderdale. After several races, with what some might say a higher profile in more ways than one, it was a relief to get back to this type of low key fell race. No early rise. No M6. No problems parking or queuing for safety pins. Just proper Pennine moorland racing.

Three Rossendale runners took their place at the start just off Cragg Road, which was part of Le Tour back in the summer. The BL category race is part flagged and part navigation. I hadn’t done the route previously but still felt pretty confident of finding my way over the relatively familiar ground.

After looking at the ever-useful http://www.racemaps.org.uk/ site I noticed that the route has 4 main climbs. So this is how I broke it down in my mind. The first of which being a long steady slog right up over Erringdon Moor to Stoodley Pike. This allowed everyone to settle into their own pace. I looked up to the horizon and could just make out the front lads turning left at the monument, already a couple of minutes in front. I knew Jason Craven (Rossendale Harriers) wasn’t too far behind although I didn’t need to look back because that was definitely his daft laugh. Weather this was shared with a fellow runner or just to himself I can’t be sure. You’d have to ask him. 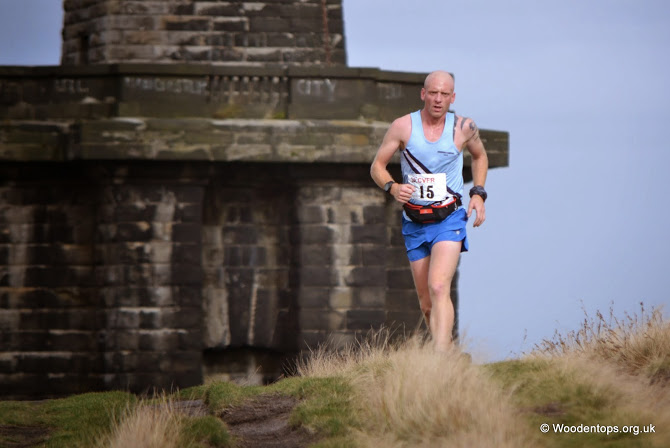 The next section from the pike isn’t flagged but the fast decent down to Withens Clough reservoir was obvious. Then a sharp right turn along its bank. I knew the second climb was coming up but wasn’t hundred per cent sure of the best line. I could however see some front runners, in local vests, snaking up and over the open moorland. I sheepishly followed with a small pack of four including local Todmorden and Calder Valley runners, which I’d caught up with, thanks to the decent. At the second climb I was reminded that Pennine bog, tussock and ditch do not make for good running. We cursed and laughed at our predicament. There must be a better way up than this. Of course there was. Confirmed by the sight of runners making up huge amounts of ground away to our left and doing so with seemingly far more ease than us. I later realised that the pied piper of this fortunate group was Chris Goddard (Todmorden Harriers), the author of the brilliant West Yorkshire moors book http://www.westyorkshiremoors.co.uk/the-book.html So it’s safe to say he probably has more than half an idea of his way round these parts. He was telling me after the race that there is a perfectly good trod, if you know where to look that is.

From checkpoint 4 there is some great fast running along the tops until you drop down (the reverse of Shepherd’s Skyline) onto London Road and back up again to Stoodley. Somehow on this third and penultimate climb I’d managed to catch up some usually quicker runners. They must of gone wrong at some point. How, exactly is beyond me as, ok its not flagged, but it’s pretty obvious and considering they must run round here week in week out (yep Tod and Calder again). I struggled to figure this one out. Anyway – passing Stoodley again and it’s more fast running over moor and track until you pop down to Cragg Vale for the last climb up to Robin Hood rocks. By this late stage the field had stretched out a fair amount and I was weary of not going wrong on the run in. My Eyes remained peeled for the next luminous flag, and then the next, right until I spotted the finish funnel with relief. I was back at the Good Shepherd community centre.

Some good runs from Rossendale with Jason Craven coming back from a summer long niggling toe injury. The injury is reportedly very similar to Gary Lineker’s famous toe injury that hampered the later stages of his career and resulted in him moving to Japan. I can’t see this happening to Jason and this is only according to his physio anyway (Jason’s, not Gary’s). A special mention to Richy ‘God is a Manc’ Campbell, who managed to knock off a whopping 18 minutes from the last time he did this race. Which is a huge 11% improvement. If you’re interested in that sort of thing.

The Good Shepherd is a cracking route with a nice mix of fast footpaths and open moorland. Without any stupidly big climbs. All with belting views over Calderdale. Finished off with homemade soup, tea & cake. Which is lovingly served up by the ladies from the community centre, and all for just a donation. What a good do.